I love a good quotation and I think this reflects the times we are going through. As I repeatedly bore my 13 year daughter on our many drives in Dublin, we are living in period that is going to be recorded in history books. This summer has spiked the Brexit and national debate and I will return to it later but there are plenty of other agendas that the Kingston Chamber and myself have been involved in at a local level in the past three months.

I have mentioned this before but I believe one of the secrets of a successful EXPO is the attitude that we go in with. If we go with an open mind, to explore, to learn and to think more creatively, we can enjoy the day and create new potential business opportunities. If we attend with a narrower view of what everyone could do for us, the beneficial returns are far less.

We are looking forward to another productive partnership with the School, the exhibitors and visitors. There is a reasonable accusation that we are all a too Kingston-centric. The health and vibrancy of our Borough is only as strong as our borough centres (New Malden, Tolworth, Chessington and Surbiton) so I am delighted that the Kingston Chamber is promoting and encouraging a broader engagement with businesses beyond the town centre.

Sir Ed Davey MP and the Mayor of Kingston will open the proceedings. The continuing support from the Kingston Council, HSBC and Chessington School is appreciated and vital to the commitment to local businesses. Go to our website to read more and to sign up.

An Independent Advisory Group (IAG) Police Meeting
In July, I attended an Independent Advisory Group Police meeting at the Kingston Police station. The purpose of these meeting is for the Police to receive feedback from a range of community and business organisations. We are fortunate that Kingston has a generally low crime profile compared to other London boroughs. The Chief Superintendent Sally Benatar, responsible for the policing of Wandsworth, Merton, Richmond and Kingston boroughs, provided a review of police issues and certainly, if Brexit ends in a no-deal condition, the ramifications that would have with police resources. One of the interesting notes from the meeting was that there are police vacancies at Kingston which are proving hard to fill. There is a drive to get more police numbers up, not just locally but nationally. However, Kingston is proving to be too expensive for most recruits, some travel in from afar. The lack of affordable housing in the Borough is one of the main issues preventing these vacancies from being filled.

Bank of England
Earlier in September, I was invited to the Bank of England for a London Chamber meeting. There were Chamber CEOs from Brentford, Wandsworth, Newham, Southwark, Bromley, Hounslow and Kensington and Chelsea.

The Bank of England representatives wanted to hear our feedback on housing, Brexit and business. It was fascinating to hear how each Chamber had similar concerns and yet how they all varied in their range of optimism, particularly on Brexit. The key issues that all the Chambers agreed on was the stagnation in the housing market (bar those who had large new builds such as Nine Elms in Wandsworth) and the difficulties of the retail sector and high street shops. It was also interesting to gauge how local Councils supported their Chambers. The close collaboration with local Councils is important for Chambers and it was worth noting that regeneration schemes did have noticeable knock on effect to business and community confidence.

The Bank of England provided a forecast on Brexit and the economic status of the UK for 2019/2020.
If the UK avoids a no-deal exit, it predicts a 2% Increase. This, they believe, will happen with immediate effect. However, predict a 5% downturn in the economy for Q3 in the event of a no deal Brexit which would in put the UK into recession.

Working with the Council
In the last 2-3 months, we have had a number of meetings with the Kingston Council, ranging from Brexit, the environment, business consultation and procurement. These have been informative. All local Councils have considerable pressures on them, with significant cost-cutting measures required. There is a relatively new team of Directors and officers at the Council but we have seen a determination and drive from Ian Thomas, the CEO, to reach out to the strategic partners to get feedback and engagement. One specific issue, procurement, is important to many of our members. There is a current lack of clarity on how procurement works to many businesses and it creates a brick wall. This not send out the right message that the Council supports local business but we are hoping after our first meeting, that understanding the issues in the first place, will start a establishing a more pro-local procurement process. My thanks to Mark Attwater of Direct Colour who attended this meeting with the Council in my absence. They have been banging the drum about local suppliers. It is early days, but very needed.  It is encouraging to see that the Commissioning team will be at the Chessington expo to further a dialogue on wider involvement of local businesses in the Council’s supply chain process and how this can be made to work within a local context. 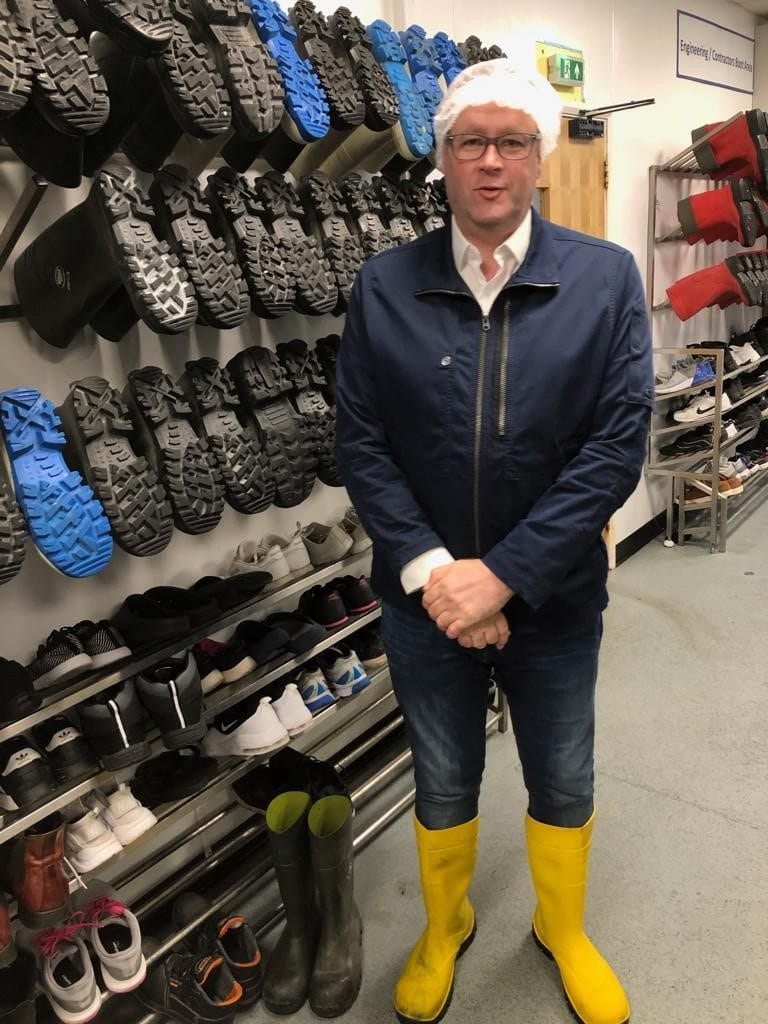 New England Seafood
One of the interesting aspects of being the Chamber CEO is learning more about the organisations in the Borough. Recently, Natalie Crew, our membership manager, and myself met James Robinson, the CEO at New England Seafood, based in Chessington. New England Seafood (NES) is a major supplier of fresh and frozen premium sustainable fish and seafood in the UK and one of the largest importers of fresh tuna. Their customers include the UK’s leading supermarkets including Marks & Spencer, Sainsbury’s and Waitrose. As a significant importer, we wanted to listen to their Brexit planning and steps taken with supply chain. They have been hardened over many years dealing with turbulent and financially difficult climates so they have planned ahead to ensure that they minimise disruption. James then kindly took us on a tour of the factory. There are very strict hygenie controls in place so we had protective hair nets, fancy jump suits and big yellow wellies. Very fetching. It is hard work for the staff in very cold conditions but it was fascinating seeing the process of fish coming into the factory and ending in the sealed packs ready for the shops. I certainly will always think of those NES staff when I open my fish packaging!

Brexit
Finally, the subject which is consuming so much time, debate and uncertainty – Brexit. In early September, the Chamber circulated a concise survey to learn more about business concerns with Brexit. The feedback has been revealing and informative. The feedback is essential to the Chamber as we will forward this to the Council and other strategic partners. We have collated the responses into a document and this will be made available shortly. This will also include our positional statement regarding Brexit.

Kingston Excellence Business Awards 2019
I have to pay a special mention to our dedicated and inspiring business community in Kingston and to our Chamber members who took part in the Business Awards. The evening recognised the diversity and innovation of many businesses and I know it is competitive. Many of our members were Finalists which is a great achievement in itself so well done. A special mention though extends to two Chamber winners, Holland Hahn & Wills and Kingston Churches Action on Homelessness (KCAH). Our congratulations also go to Business Made Simpler, Holiday Inn, Silicon Reef and the Rose Theatre for being Commended/ Highly Commended.  See all the winners and photos on the awards website. 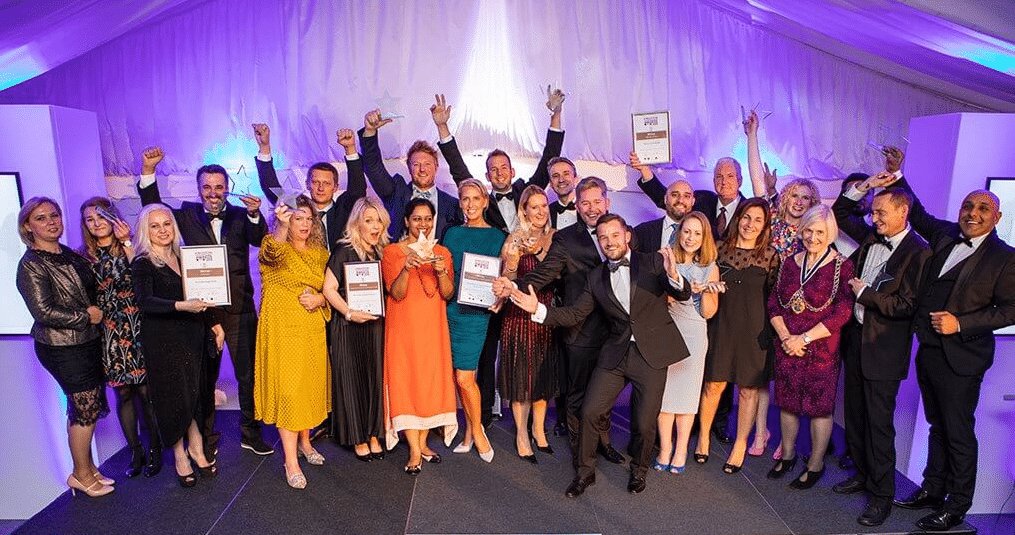 I hope this gives you a brief insight to some of the many activities and areas of Kingston business life the Kingston Chamber is involved with and supporting, with our members and partners. We are here to Connect, Support and Influence.

All the best
Forbes Low
CEO Kingston Chamber of Commerce